The year 1929 was a special year for Scouting as it was to celebrate it’s 21st Birthday, it was also the year of the 3rd World Jamboree, which was going to be held at Arrowe Park, just outside Liverpool.

At the Jamboree to mark 21 years of Scouting BP was honoured with a number of gifts including a Baronetcy by King George V, BP took the title of Lord Baden Powell of Gilwell, other gifts included a set of Braces and from the 50.000 Scouts of the World attending, a very special gift of a Rolls Royce Car and a touring Caravan

The Jam Roll & the Eccles Cake

Before the Arrowe Park Jamboree, Christian Holm, the President of the Danish Boy Scout Association wrote to all the Scout organisations that were to be present at the Jamboree and suggested that each Scout should donate a penny or the equivalent in their own currency to to enable the movement to by a gift for BP to celebrate 21 years of Scouting.

Mr Holm contacted BP’s wife to ask for ideas for a special gift that might be presented to him.

Lady BP did not give up easily and finally BP noted a newer car would be nice, since the old one was always braking down (It broke down twice during the jamboree and had to be towed home).

In thanking the Scouts BP said “I don’t know how to thank you for what you have done for me. I feel undeserving of the many gifts and honours showered upon me during the last few days and now you have capped it off with this wonderfully fine present, representing the gift of boys from every nation in every part of the world and I accept it with feeling of something in the way of gratitude more than I can express” In closing he noted that the new car “will enable me to visit more Scouts than I have in the past and I am mighty grateful for it.

The presentation consisted of Rolls Royce and a Eccles Caravan as well as a cheque and a portrait by David Jagger. The Car got the nickname of Jam Roll because it was a Rolls Royce presented at the jamboree and the caravan was called Eccles. Eccles was the name of the caravan manufacturer, but an Eccles is also a type of fruit filled pastry. A joke going round the jamboree at the time refereed to the Jam Roll towing an Eccles….cake

Jam Roll is a 20 horse power Rolls Royce, chassis number GVO-40, it was one of the last 20hp chassis to be made. The car was fitted with a custom made ‘D’ back limousine body that was made by Page and Hunt, it was one of only a few bodied made by the coach builders for Rolls Royce.

The order for Jam Roll was a rush order with the chassis card marked “Urgent 6/8 weeks” The order was placed on the 21 June 1929 and the completed chassis delivered to Page and Hunt on the 19 July. Further noted on the Chassis card state “if this car is not complete by the date of the jamboree Rolls Royce to loan car for one day for this occasion” The car was presented to BP on the 10 august 1929 only 50 days after Rolls Royce received the order.

A unique feature of Jam Roll is the radiator mascot rather than having the typical “Sprit of Ecstasy” (The Flying Lady) that takes pride of place on a Rolls Royce radiator, Jam Roll had a custom-designed mascot that incorporates the Scout arrowhead and Scout motto “Be Prepared” 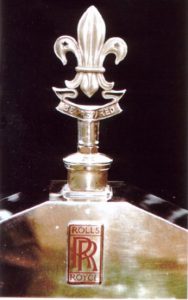 The Order of the Braces

The day after the presentation the Scouts of Ireland held a solemn ceremony in which he was presented with the “Order of The Braces”. They erupted in laughter and applause as BP accepted the coveted new Braces, with same fanfare as he had accepted the car and caravan the previous day.

Jam Roll was seen at many Scouting events from 1929 until the late 30’s and was easily recognised because of it’s unique mascot. It was also used by BP’s for family trips and other outings.

Lady Baden Powell sold Jam Roll in 1945 and it passed through nine owners when Ben Grew brought the car in 1986 with 53,000 miles on the clock.

When BP emigrated in 1938 the caravan was donated to Gillwell Park, where it has been ever since. The caravan has recently been restored back to it’s original condition.

Jam Roll and Eccles Cake appeared together in 2007 at Gilwell Park as part of the Centenary of Scouting.

While searching the Internet for further information on BP’s Rolls Royce there seems to be some confusion relating to this gift. A number of sites seem to think that the Rolls Royce was a wedding gift for BP and his wife Olave.

I suspect this confusion has come about due to the fact that in 1912 all members of the Scouting Movement were invited to donate money to buy a gift for them, Scouts were limited to 1 penny while Scoutmasters were limited to 1 shilling.

By 1913 the movement had raised £411 14s 1d. The car brought was a 1913, 20 H.P. 6-cylinder Standard Landaulette and was painted in Green (the Scout colour) and later on it was adorned with the Scout statuette on the radiator like the Rolls was