The connection between Scouting and Tintin’s creator have a lot more in common then just their year of birth. Georges connection with Scouting began in 1919 when joined the Saint-Boniface Scout Group in Belgium, where it became obvious he had a great talent for observation and a love of the outdoors and wildlife. His fellow Scouts were also impressed with is understanding of Basic Scouting Skills like knot tying and pioneering and enjoyed sharing them. These skills also came in very useful for the troops regular trips to the country and further a field.

Before long Remi never left for camp without packing a notebook to record all sorts of observations, that would later become the bases for a lot of the Tintin Adventures an example of this is a sketch done in 1923 of the Saint-Boniface Scouts roped together and on a climbing expedition in the Pyrenees that would later become an illustration in the 1959 adventure in Tintin in Tibet.

While on another Scouting Exhibition he had an encounter with Mussolini’s Blackshirts, a group of people employed by Mussolini to enforce in Fascist Parties rules, their correct title was Fasci di Combattimenti, This encounter was thought to inspired another one of Tintin’s adventures, that being Tintin and King Ottokars Sceptre. 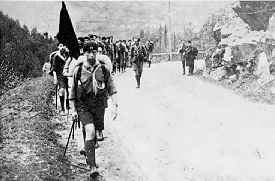 At the same time has his career as a cartoonist was taking Herge Scouting skills were becoming recongised, when in 1923 he as appointed as Patrol Leader of Squirrel Patrol, where assumed the name Curious Fox. He was a natural Leader with a great sense of humour, who was able to inspire younger Scouts to go that little bit further with challenging activities..

The Birth of Tintin

Scouting gave Remi his first break as an artist and cartoonist when he was cored by his fellow Scouts to provide illustrations for the Saint-Boniface Scout Group’s magazine Jamais assez (Never Enough).

These illustrations we so good that they caught that he ended with the help of Rene Weverbergh, the Leader in charge of the Brussels Scout District, up landing a job age 17 on Le Boy Scout, later to be known has Le Boy-Scout Belge, the national magazine of Belgium Scouts where under the pseudonym of United Rovers introduced the Scouts to a new character in the form of Totor, an adventurous Patrol Leader of the Maybug Patrol , who was based on Herge experience and who later became the prototype for the now famous character of Tintin, not only did Totor have a passing resemblance to Tintin, but he as also had a dog who went every where with him. Totor had fans amongst adults and children and ran until 1931, when him and Tintin existed side by side. The Totor cartoons ran form July 1926 to July 1929

After earning a diploma Herge was in need of paid employment so with the help once again of Ren Weverbergh he got himself a job on the daily newspaper Le Vingti me Si cle ( The Twentieth Century). He left the newspaper , but was to return on completion of his National Service when is career as an illustrator really took off.

By the time of his last adventure Tintin having been on 24 adventures, having been published in 60 different languages and selling over 120 million copies but Herge never forgot his time in Scouting and in fact let Scouts and Guides camp in his Belgian Mansions grounds and he would quite often wander down to the camps and ask questions about the activities they were doing as well as share memories of his days in Scouting.

Tintin can be looked at as a typical Scout as he his practical, resourceful and is able to use a number of skills to survive such as knot tying and tracking

In 2007 an extensive mural drawn by Hergee when he was 15 was found in an old school corridor of his old school, St Boniface Brussells. The long decorative frieze bearing knights in armour, Red Indians and Scouts was uncovered by chance in an unused corridor of his old school in Brussels, after someone decided it should be redecorated. The mural’s discovery coincides with the centenary year of Herge’s birth, just as Steven Spielberg and Peter Jackson were planning to bring the adventures of Tintin to the big screen.