Scouting in the past as had a connection with railways in the way that there have been three steam locomotives that were given names connected with Scouting, one was the LMS Royal Scot Class Locomotive that was given the name The Boy Scout, while the other two were a Britannia Class Locomotive named after Lord Rowallan, who was a Cheif Scout of the British Commonwealth and Empire in the 1950’s and a GNER Sandringham Class called Gilwell Park.Information on these three locomotives is given below.

Baden-Powell himself has a connection with the railways as his godfather was Robert Stephenson, who like his father George Stephenson was a locomotive designer as well as a civil engineer. It was reported that at the naming ceremony for The Boy Scout Henry Fowler referred to BP has being the grandson of Robert rather than his godson. Baden-Powell takes his first two names from that of his godfather

The London, Midland and Scottish Railway named one of their 71 6100 Royal Scot Class Locomotives “The Boy Scout” . It carried the number 6169 and was originally built in Derby in May 1930. The engine was officially named by Baden Powell on the 9th December 1930 at Euston Station, when the Scout’s “Fleur-de-Lys” Badge was also fixed to the splasher.

The Boy Scout was one of only 3 of the 71 of the class built that didn’t have it’s name changed when the LMS decided to name the locos after Army Regiments, the others were 6168 “The Girl Guide” and 6159 “The Royal Air Force”.

The chief mechanical engineer of the LMS and designer of the Royal Scott Class Locomotive, Sir Henry Fowler was also a former District Commissioner 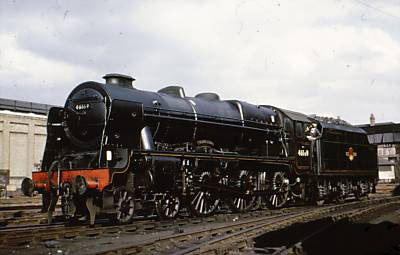 One of the Britannia Class (BR Standard Class 7) No. 70045, designed by Robert A. Riddles CBE, was brought into service in June 1954 was named after the then Cheif Scout Lord Rowallan this locomotive was then retired in December 1967.

While doing research on the Internet for the page on Gilwell Park I came across information about a Locomotive called “Gilwell Park”, this locomotive was a B17 or “Sandringham” 4-6-0 Class locomotive built by the GNER Railway at their Darlington Railway Works in September 1935 and it was given the number 2846. It designed by Nigel Gresley and was one of 73 in it’s class, the first 48 of which “Gilwell Park” was part of were named after English Counrty Houses with the remaining 25 were named after Football Clubs.

During 1943 it was rebuilt and became a B17/6 class and given the number 1646 in 1946, under BR Grouping was renumbered to 61646. The Locomotive was finally withdrawn from service and scrapped at the Doncaster works in January 1959.

Why this locomotive ended up being called “Gillwell Park” I am unsure, but I will do so more research into the subject and will update this page when I find out some more information