What is the Wood Badge?

The Wood Badge is a training program that was developed under the direction of Lord Baden-Powell of Gilwell. The training offered at Gilwell Park has been adapted by each national Scouting organisation for use in their country so that the words “Wood Badge” and “Gilwell” are used internationally to mean adult training in Scouting.

Training recognition items are also common throughout the world and consist of a leather Turk’s Head Woggle, Wood Beads, Leather Lace and Scarf 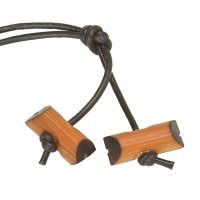 In 1887 Baden-Powell was posted to Cape Town and seconded as Aide-de-Camp to his uncle. General H A Smythe. General Officer Commanding South Africa Shortly after his arrival at the Cape. trouble broke out with the Zulu warriors. led by their chief Dinzulu On state occasions, Dinzulu wore a necklace some 10 to 12 feet in length consisting of over a thousand beads, ranging in size from tiny bead emblems to others, four inches in length It was considered sacred by the warriors, and there was a belief that if ever captured all resistance by the natives would cease The necklace was kept in a cave. high on a mountain and guarded day and night

The next part of the Wood Badge Story takes us to Mafeking where in the book “The Wolf that never Sleeps” Baden-Powell relates the incident where, after many months of siege, one day he was felling very despondent when an old Zulu man of high caste gave him a leather thong. This thong as was the custom had been placed round the old mans neck at birth to ward off evil spirits and so bring the wearer good luck.

The story further relates that Mafeking was soon relieved and the leather thong joined the other souvenirs.

In 1919 the first training course for leaders was held at Gilwell Park. At the end of the course Baden-Powell wondered what to give them to signify passing the course. He went home and while rummaging through his bags he came across Dinzulu’s necklace and the leather thong. A few days later he invited the leaders to dinner and presented each of them with two beads and instructed them to buy a bootlace and tie a bead to each end and hang it around the hat

The Scarf is officially coloured dove grey (the colour of humility) on the outside and warm red on the inside to signify warmth of felling.

On the apex of the Gilwell scarf is a small patch of Maclaren tartan in honor of William de Bois Maclaren, a Scottish businessman and the District Commission  for Rossneath, Dunbartonshire, who, as a descendant of the Scottish MacLaren clan, donated £7,000 in 1919 to buy Gilwell Park, a 55-acre estate on the edge of Epping Forest, London, as a training centre for Scouters and as a camp site for Scouts

Originally, the neckerchief was made entirely of triangular pieces of the tartan, but its   expense forced the adoption of the current design. The dove grey material is a registered cloth, which means it cannot be used for any other purpose, nor may it be modified or any additions made to it. 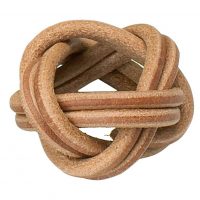 In the 1920 the scarf, which had always been tired with a knot, was held with a scarf slide. So far as it is known, the name “woggle” was invented by Gidney, the first chief of Gilwell

In the early days of leader training, fire lighting by friction was very much a novelty and for many years was demonstrated on Wood Badge courses. A main piece of equipment was a length of leather thong.

Using one of the fire lighting thongs, Bill Shankley, who was at the time serving at Gilwell, produced a two strand Turk’s head slide that was adopted as the official “woggle”

In addition to the Insignia mentioned above there a couple of other items that  were associated with early Leader Training Courses, these are mentioned below

Baden-Powell first encountered the kudu horn at the Battle of Shangani, where he discovered how the Matabelewarriors used it to quickly spread a signal of alarm.

He used the horn at the first Scout camp at Brownsea Island in 1907.

It is used from the early Wood Badge courses to signal the beginning of the course or an activity, and to inspire Scouters to always do better. 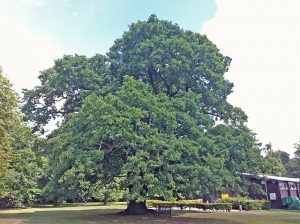 Although the original beads came from Africa, reputedly having belonged to Dinizulu, the fallen branches of the Gilwell Oak were carved into early wood badges awarded to leaders trained at Gilwell. Modern wood badges are made from alternative materials but special commemorative beads carved from the Gilwell Oak are sold by The Scout Association to certified leader.

The Gilwell Oak was nominated for English Tree of the Year 2017 and beat the nine other contenders, having polled 26% of the 7,000 public votes. It was subsequently chosen as UK Tree of Year from the winners of the four Home Nations by a panel of experts.

The tree represented the UK at the European Tree of the Year Awards and came in fifth place with 12,955 votes In commemoration of the tree’s win the Scout Association was presented with a model of the tree. 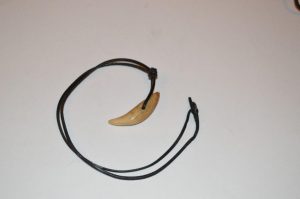 In 1921 the first training course for Cub Leaders was held. Rather than receiving the Wood Badge leaders were presented with a replica wolf fang on a leather lace known as the Akela badge.

In 1926 it was decided to use the Wood Badge design for both Scout and Cub leaders although the names would continue to be Akela badge for Cubs and Wood Badge for Scouts  To differentiate between the leaders a coloured bead was added above the wood beads to show which section they belonged to. Yellow beads were used for Cub leaders, green for Scout and in 1927 a red bead was introduced for Rover Scout leaders. This idea proved to be very unpopular and ceased to be used from 1928, at this point the badge became universally known as the Wood Badge.